THE OLD FIEF OF GIUSTINIANI 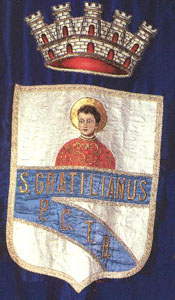 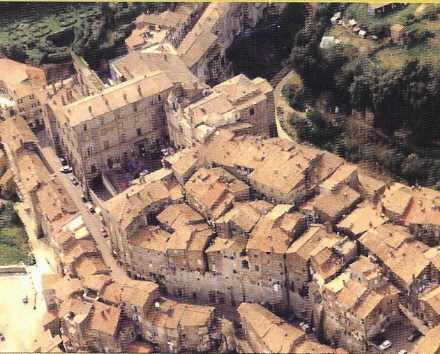 Coat of arms of Bassano Romano and view of the city

Bassano Romano (approximately 4.300 habitants) is an hospitable village built by Etruscan, situated in a very special position: 45 minutes far from Rome; 30 minutes far from the medieval wonderful Viterbo; 15 minutes far from three beautiful lakes: Bracciano, Martignano and Vico; 10 minutes from the old Sutri and its Etruscan necropolis and amphitheatre; 45 minutes far from the sea. His castle: “Palazzo Giustiniani”, built in 1200, shows the influence of the renaissance age, above all in its architecture and decorations. The Palace has a simple and rigorous main façade which overlooks the square, while the back façade is quite elegant with its double order of porticos opening on the large garden. This castle was the set for some of the scenes of Federico Fellini masterpiece "La dolce vita". Now is being restored and it will be the summer cultural seat of the Italian Senate.
During middle age, Bassano was a minor fief of the Anguillara, until it was acquired in 1595 by Vincenzo Giustiniani. He was the son of Giuseppe Giustiniani who had left the island of Scio in the Aegean Sea, when the Ottomans had occupied it. The Giustiniani were very rich and after the father had bought a stately mansion in Rome, the son thought it necessary to possess a fiefdom in order to better justify the role the family was acquiring in the Roman aristocracy. 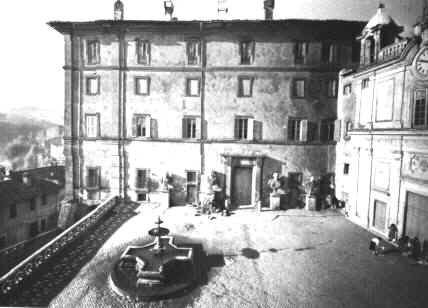 The Giustiniani gave to their new acquisition a Renaissance appearance, by levelling the surface of the tufa rock upon which Bassano rests and by opening in the rock a grand gate leading to the town. The main street of Bassano is still dedicated to a pious member of the Giustiniani family although the Giustiniani sold their fiefdom to the Odescalchi back in 1854.
Vincenzo Giustiani built a Renaissance palace, maybe designed by il Vignola, linked by a bridge to a large garden. The Giustiniani built also the church in the main square of Bassano.
Vincenzo Giustiniani was a great and competent collector of works of art and not only of ancient sculptures as he bought 15 paintings of Caravaggio. He ordered a detailed and illustrated catalog of his collection: the resulting two volumes La Raccolta Giustiniani (1631) document more than 300 sculptures, reliefs and paintings. This explains why the main square of Bassano is decorated with four gigantic busts. Most of the works of art collected by Vincenzo Giustiniani were bought in 1826 by the King of Prussia and can be seen in Berlin.

It’s recently done by the French transmission "Horizons" (May 2008), produced by Vision International and “France 3” directed by Andrč Waksman the movie "Les Giustiniani une saga Mediterranean" (one hour, in French language). The movie director start from the personal history of Fanny Giustiniani who lives in a little village in Corse, who tries to find its "roots", touching the places where the presence of Giustiniani was important : Chios, Genoa, Rome, Corse and Bassano Romano. In the documentary, various interventions of historians and university professors. In Chios island location in: Chios harbour, Korais library, Sklavia, Dotia, Vessa, Kampos, with some interviews in greek language with subtitles in French.

The film, is online and fully visible on the site of France 3 in this link:
"I Giustiniani, une saga méditerranéenne" (100508) 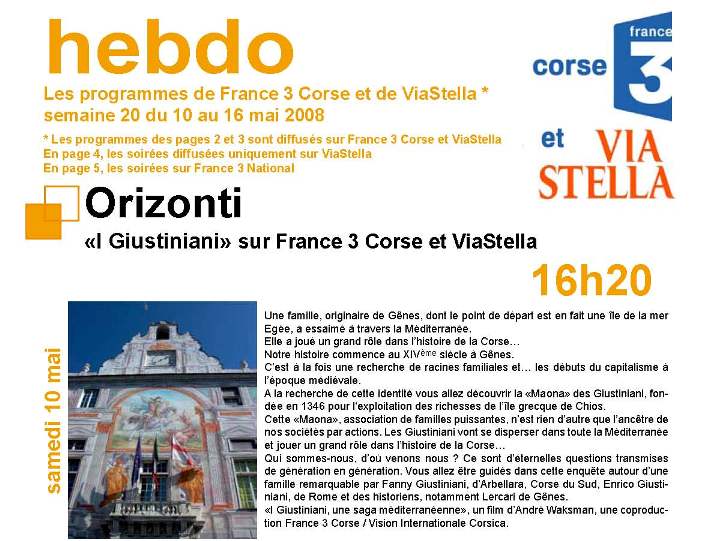 Bed and Breakfast "La Rocca" da Roberta e Daniele Bassano Romano Via G. Garibaldi, 23 Tel: +39 0761 635518 Cell:+39 329 8503315
B&B “La Rocca”, in Bassano Romano (Viterbo), a strategic point of the South Tuscia, in a place rich of charm for the natural environment it offers and for the history and art it represents. The house is new and it has been expressly “built” so that the guests can find all the comforts they needs, the privacy and the familiarity they desire. At our house you can spend a short holiday under banner of nature and culture, enjoying the tradition and the authentic savours of the ancient times.

BASSANO ROMANO WITH HIS GIUSTINIANI CASTLE LOOKING FOR PATNERS

With this European spirit of to re-establish old ties among people of various cultures and society, on April 2004 the local committee organized an international convention (“From Giustiniani age to the European community: a continuous trail”) to discovered again the historical presence of Genoa and Venice in Mediterranean area
They taken part university teachers and administrators who signed a declaration, for giving followed to this initiative, also to the aim to realize a permanent organism, between several subjects, action to on behalf value future events of its partner, also through one “Municipalities net” with more active associates with the purpose to safeguard the historical-cultural assets, for the full valorisation of situated palaces, objects, memories of Genoa and Venice in the Mediterranean area.
This organism will be able to introduce proposed of integrated participations, financed by structural European founds for twinning between the various communities and recovery of historical and artistic site, traditional villages in state of abandonment and degradation. This project remains however opened to private associations and others municipalities, than in every moment can enjoy in it.
Last September (2006) our municipality has signed his first twinning with the Greek municipalities of Aghios Minas e Kampohora situated in Chios island. This twinning will be ratified next September (2007) in Greece with the participation of three new Italians Municipalities (Bolano, Vezzano Liguere and Moneglia) to enjoy in our project.
The municipality of Bassano Romano ( www.comunebassanoromano.it ) could be interested in twinning and changing with others Europeans municipalities, also into the Union European programs. We are looking for a partner with a similar profile especially in the field of culture and historical background (Venice and Genoa presence during medieval age in the Mediterranean area) and population number (about 4.000 habitants).

www.giustiniani.info
The History of Giustiniani family